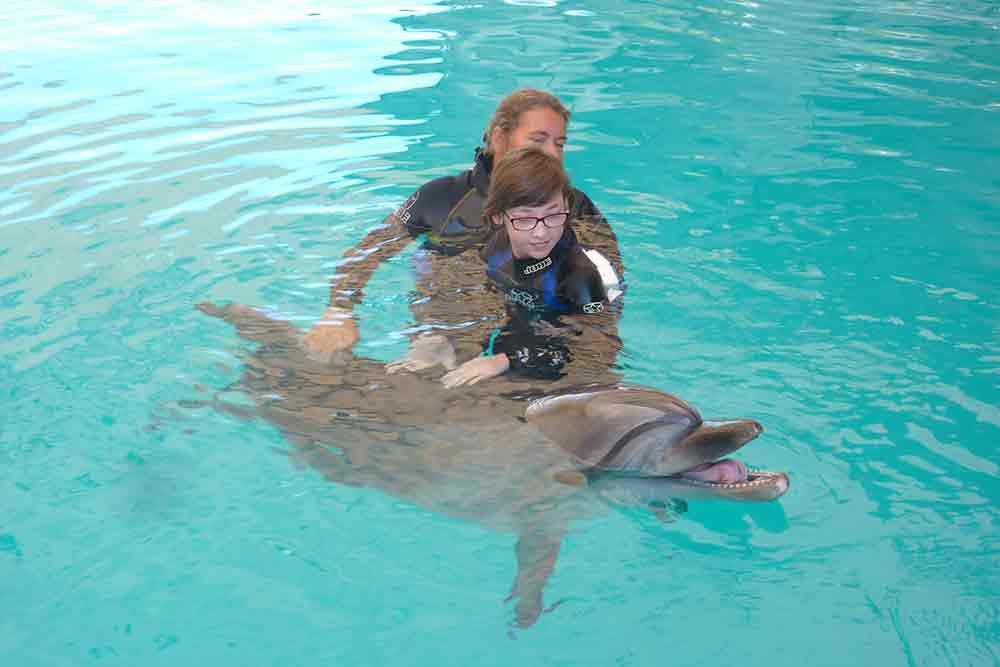 The dolphins and Dolphin Therapy

Dolphins are just beautiful animals. I love them since childhood. I feel that I am with them as a soul already connected from birth and even before that. From dolphins, one must rejoice, otherwise it would not be possible!

Just a few people are lucky enough to observe them and swim with them. I was so lucky and am grateful for it. It was not in the wild, but at the dolphinarium. We stayed nearby the historically city of Antalya.
Here is some general information about dolphins. Dolphins always look like they are friendly, with a smile on their face. But be careful!

The first impression can be deceptive: dolphins facial expression does not change.

Even when he is really angry or is about to attack, it looks like he is still smiling. They do not have any facial muscles, which could change their expression. When you know dolphins, you can see by their body movements in what kind of mood they are. Sometimes slow and lazy, sometimes alive and naughty. Actually their body is their face.
Not many dolphins are so tame that they allow to me touched by man. Their skin is not as cold as fish skin, but warm as ours, because dolphins are not fishes but mammals. They have a constant body temperature.
They have a thick skin with fat layers to keep them warm when the water temperature cools down. It is not so easy to describe the skin of the dolphin itself. It is not entirely smooth when you touch it, yet it is smoother than the smoothest hull, and therefore allows dolphins to be much faster than the a boat vessel. Dolphins have an extraordinary amount of muscles to help them swim fast, it is even faster then a torpedo boat.

Since dolphins are not considered fish, but marine mammals. They do not have gills, but lungs. They have to come up for air at least once every fifteen minutes. Their blowhole is not in front of their face, but on top of the scalp, so they do not emerge with their entire nose, but they just stick their blowhole out of the water to get air. The blowhole opens and deflates air, they take a quick sniff and the blowhole closes again so that no water will be coming into the lungs. They take a couple of these
breaths before they go down again. Dolphins obviously have to breathe at night. But when they sleep, they can not bubble up from the depths to the surface. How do they do that? Their solution was very surprising to scientists:

Dolphins sleep only with one half of their brain. The other half remains awake so that they can continue to swim. After one to two hours of sleeping, they will let their other side sleep and the first one wakes up.

Dolphins live in pods, there are twenty-five different species of dolphins. All the dolphins from a pod know each other. They have different voices and their own names to communicate well under water. They are calling each other because they have ten times better hearing than us. They hear much higher tones, ultrasound, that we can not hear. Even in murky waters they can ‘see’ and hear what is in front of them, wether that is a rocky reef a fish or a man. In this way, they can hear from kilometers
away. There is not much know yet about how they do that, scientists are still researching that. But they know that the dolphin has this ability because of his so called ‘watermelon’ in the front of his head and uses sonar to ‘see’

Indeed this is like an ultrasound scan in hospital, dolphins can look into the body of other dolphins and tell if it is sick or if his belly is developing small baby.

Shortly before they give birth they call out to the other dolphins to assist the expectant mother. Dolphins are born fluke first and delivery is not such a noticeable effort for mother.
The baby measures more than sixty centimeters and it looks a bit wrinkly.
The mom lifts up the baby with her nose to the surface, so it can take it’s first breath as the little baby has to learn how to breath.
Dolphins don´t live in caves or in other sanctuaries. They just swim in the sea even with their newborn babies!
Therefore, it is guarded and protected. They pod protects the little baby from a shark attack. With their pointy noses they beat the shark to his sensitive stomach and banish him or even kill him. 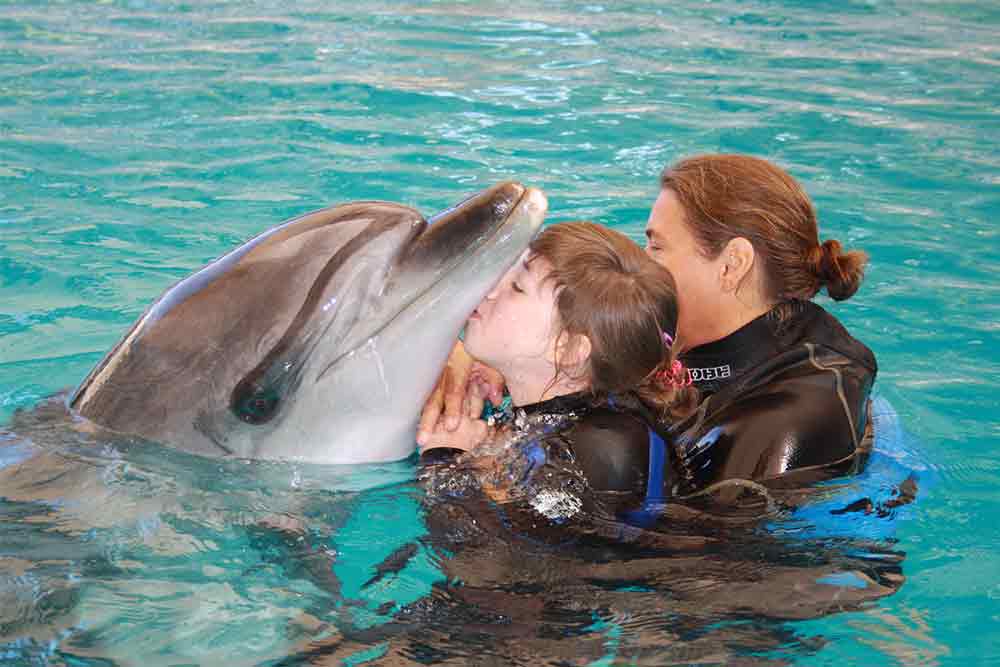 Therapy, as I mentioned at the beginning. I had the opportunity to be with dolphins ten days. When I first walked into the dolphinarium named Troy Aqua Park in Belek I saw three dolphins in the pool when they were practicing for the dolphin show with their trainer. I felt happy, as I was fulfilling my dream: to see the dolphins, swim with them, be in their presence and to be treated by them.

When I entered the pool the dolphin therapist and „my“ dolphin Bender were already waiting for me. I was wearing two wetsuits, as I had to be at least thirty minutes in water that has a temperature of 22 degrees Celsius. I was moving a lot but it was necessary for me to be calm and keep as much balance as possible. I feel tremendous respect for the dolphin and I feel happy that I was with him. I listened to what the dolphin therapist said regarding the safety of the dolphin. According to
how to move, where to rub and also where not to touch. So I know that the actual process of healing with dolphin therapy begins with touching the dolphin.

I can touch him all over the body except the head around the breathing hole, around the eyes, nose, genitals and fins. As I described at the beginning of the story about dolphins, the dolphin skin can not even be described deeper. The experience is unforgettable and so unique. But I will try to explain at least how I perceived it for myself. The skin is warm, not cold as a fish, soft, delicate, fragile, I feel the flowing life energy. The whole dolphin is like a life-giving creature full of energy,
love, unconditional love, joy and playfulness.

Awakening deep deep feelings in you that had gone to sleep. I felt a sense of safety, security, cleanliness, confidence. Confidence in life, that everything is fine and as it should be. There are no mistakes, only experiences.
The most touching for me was the healing. I started to feel more relaxed in my body, my muscles and release tension subsided.
Every day was a small step for me to heal myself, my body and soul.
Because I was so near to the dolphins blowhole, which is on the head, it was remarkable for me to see how the breathing hole opens and closes.
Probably every ten to fifteen minutes Bender always dived and then breath. I experienced the rhythm of inhalation and exhalation with him every day and I inscribed that into the body.
Next to Bender there were two other dolphins in the pool, their names were Iphone and Cikan, who also helped with Dolphin Therapy. It was interesting to hear how they communicated together and they gave each other signals. For example, when I swam with my dolphin therapist and I held on behind the dorsal fin of Bender, Bender gave his two friends signals as if he knew what was going on with them and their health while passing. I really liked the sounds. They also communicated with
their trainers who, when they gave some targeted commands like „whistle“ talked and whistled back to them. In these communication sounds you could hear joy, playfulness and mutual responsiveness.

Day after day I felt how my relationship with the dolphin transformed.

At the beginning I perceived love for him, and now I feel no fear or apprehension anymore, I can feel his love. Several times it was true Dolphin Therapy healing power. When me and Bender established close contact with our bodies. I mean, I was freed of my body, I felt calm and I allowed him to heal me. Dolphin Therapy helped me to lay my body on the water in the supine position. Bender began circling around me, around the whole body.
The good news was that the dolphin therapist and trainer let the dolphin to be in freedom and fluidity, So that Bender could be his full self involving healing. After a while I felt the vibrations throughout the body.
Thanks to ultrasound and sonar signals emanating from the dolphins melon on his head, I perceived that special tingle, tingle and it made me want to laugh. Bender swam and touched those places on my body that are bad or were there is disharmony.
Our relationship grew stronger. Other therapists or trainers told me that it is an unique relationship that Bender and I have,

Bender was called such “a lover”. He kept kissing me and enclose his nose on my face.
This therapy was a great gift every day.
I liked the fact that dolphins are able to show that even if you do not like something, that there are different ways. For example, if they feel a child has a great fear of water, the dolphin will swim away from the child and begins to play with a ball or a toy invoking joy and playfulness in the child.
I saw that with a little boy who came for the first time for Dolphin Therapy and did not wanted to go into the water. Yelling, crying simply afraid. The dolphin drifted from the shore to the ball, he began to play with him, jumping into the water and make those beautiful sounds that the boy stopped being afraid. The third day he climbed into the water, and fear slowly disappeared. After Dolphin Therapy I would go on the Alpha Therapy Chair. It’s a blue backlight chair in the shape of the waves, which has got a gel pad under the head. At three places were the the black circles are you will feel vibrations similar to those of the
dolphin. This was supplemented with the music of dolphins and whales,
sounds and voices. Then I also had a Tibetian bowl massage for integration and release.
Between me and Bender it was not only a therapeutic relationship, but also a friendship. Everyday I looked forward to see him and I wanted to spend as much time as possible with him. Friendship with Bender gave me more self-confidence, self-love, walking stability, release muscle tension and greater confidence to express myself, both verbally and emotionally.

I believe that friendship between man and dolphin can be profound.
Parting with Bender was difficult for me, but I knew when I would think of him, I will be with him and he with me.
I know other friendships, were the dolphin always swam toward the shore accompanying a boy on his way to school walking along the shoreline. The boy would call the dolphin and fed him and the dolphin appeared every day, even if he stayed away from the shore. Another story is that a man rescued dolphins from fisherman. And when a few years later, his boat was shipwrecked, the dolphin brought ashore the man and also saved his life.

I believe that love and friendship can be unique and healing.“